FAI (Fondo Ambiente Italiano) once again celebrates its annual Giornate di Primavera (Spring Days), a unique opportunity to discover hidden treasures throughout Italy. On Saturday 25th and Sunday 26th of March you can visit the Baraccano Monumental Complex: the Conservatorio, the Theatre and the Church, in via Santo Stefano 119. Bologna.

The Piccolo Teatro del Baraccano (Little Theatre of Baraccano) was constructed in the 15th century. It is part of the Conservatory of Baraccano, of which it is the west wing. The building had been used as the Conservatory of Putte until the ’70s, where the wealthy Bolognese orphans were educated and prepared for marriage. After the seventies, the place has been closed for about thirty years. In 2006, it was reopened as a theatre, thanks to the accurate restoration of the Municipality of Bologna. During the reparation, further frescoes have been discovered in the main hall.

The name “Barracano” comes from the term barbican, or the tower of a defence structure. At the end of the 14th century, a fresco depicting the Madonna, allegedly by Lippo di Dalmasio, was painted on a segment of the old city wall. This led to the building of a small chapel to enclose the painting. The chapel was later enlarged by the Bentivoglio family. The fresco was repainted in 1472 by F. del Cossa. By the end of the 15th century the church and its adjoining Conservatorio delle Putte, was one of the richest, most thriving establishments of the city. The dome was built by A. Barelli in 1682.
One of the most peculiar Renaissance porticoes in Bologna is that of the Conservatory of Putte del Baraccano: a wide loggia, built during the reign of the Bentivoglio family, consists of majestic stone columns whose shaft is decorated with an elegant moulded disc. 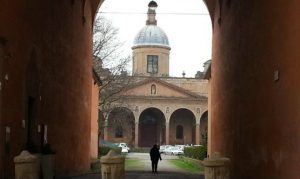 Visits – how to:
The visits are free and will be led in English, French, Arabic, German, Spanish and other languages thanks to the special guides of the project Arte un ponte tra culture
Complesso del Baraccano. Via Santo Stefano, 119. Bologna | Saturday 25 and Sunday 26 of March from 10am to 6pm
La Quadreria Via Marsala, 7. Bologna | Saturday 25th of March from 10amo to 7pm