On  the occasion of ArteFiera Bologna will be filled to the top by contemporary art. It will be a colorful invasion, full of exhibitions and performances, happenings and extraordinary events. As every year ART CITY White Night will be on Saturday night. This special feature of ART CITY has always been to involve not only art galleries and historical palazzi but also shops, cafes and wine bars in and around Bologna’s city center. Therefore try not to  miss the event on Saturday January 28th, 2017. It is organized by the Municipality of Bologna and BolognaFiere, together with Bologna’s cultural  and commercial entities.
Everybody is invited, nobody will be excluded. The night has never been so thrilling. 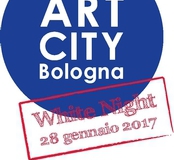